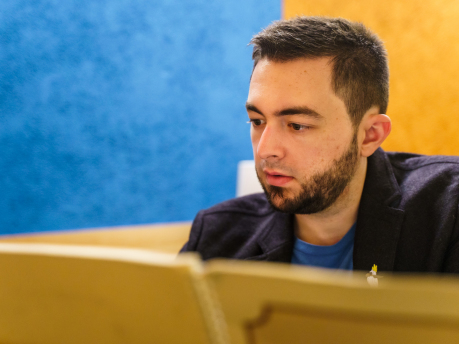 Arturo Fernandez (b. June 23, 1990) is a native of Miami, Florida. He has had his compositions performed by groups such as the Ludovico Ensemble, the Fifth Floor Collective, and the Boston Conservatory orchestra under the direction of Yoichi Udagawa. He has also had compositions premiered at various summer music festivals, including the New York Summer Music Festival, the Atlantic Music Festival, Sienna Summer Music in Italy, and the Art Song Lab in Vancouver, BC. He is a graduate of the Boston Conservatory, and also has a Master in Music from the Cleveland Institute of Music and a Doctor of Musical Arts degree from the College-Conservatory of Music of the University of Cincinnati.

Instrumentally, Arturo Fernandez is an accomplished violist with experience in historically informed performance practice, and a thereminist. He first played violin at the age of seven. He began to play the viola in high school, and has played in various orchestras such as the Metrowest Symphony Orchestra, the Mercury Orchestra, the Case Western Reserve Baroque Orchestra, and the Ohio Light Opera orchestra. His teachers on viola have included Viera Borisova, Rictor Noren, and Kirsten Docter. On the theremin, Arturo has studied under Dalit Warshaw.﻿﻿

At present, Mr. Fernandez is active in the greater Boston area. At the moment, he primarily acts as opera critic for the blog Schmopera, as well as acting as an orchestral player to the Boston Civic Symphony and the New England Philharmonic. He is also the current violist of the string trio Trio Menagerie, which travels around and gives performances in non-standard venues such as conventions.